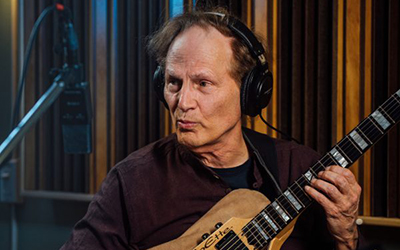 Guitar | Jazz guitarist, composer, novelist, poet, and educator Anson Wright has performed throughout the United States and abroad, including India. A graduate of Princeton, he left graduate studies at Columbia to pursue both music and literary careers. In addition to his three featured jazz CD’s, including his December 2019 CD, Only Love, he has authored three books. His poetry was set to music in the 2008 spoken-word CD, The Sky At Our Feet. Anson has studied with Howard Roberts, Jerry Hahn, John Stowell and many others. He has taught at numerous schools including New York University, Pacific University, and Portland Community College. www.ansonwright.com

“Wright is thoughtful in his writing and on the guitar he can articulate seamless, fiery ideas. He can also express great tenderness. Wright may not be a household name, but he should be.”
All About Jazz

“The quality of his playing is exceptional … In sheer color and variety, in the depth of its characterization and the exceptional range and refinement of his guitar playing, Mr. Wright imparts a powerful stature to everything that he plays.”
Jazz da Gama

“Wright’s ability to combine technical prowess and beauty is truly the pearl within.”
Jazz Sensibilities